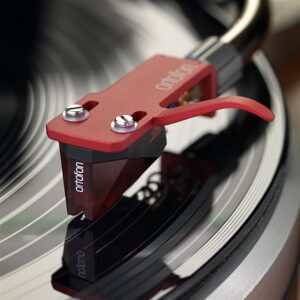 The cartridge component on a phonograph turntable that holds the stylus, which is a needle attached to a cantilever arm is known as the cartridge.

How does it work

The vibrations of the stylus are transferred into electrical energy by a magnet inducing current into coils; one coil for the left side and one for the right. “Moving magnet” cartridges have the magnet attached to the end of the cantilever, while “moving coil” cartridges place two tiny coils on the end. In either case, the arm acts like a vibrating magnet.

Earlier phono cartridges were ceramic and used the piezoelectric effect to create the electrical signal. The cantilever end of the stylus arm actually contacted the ceramic base, which picked up the vibrations (see piezoelectric). See stylus.

The advantage to the moving coil is less mass at the end of the cantilever because the coil is smaller than the magnet. There is also less electrical charge (capacitance). However, the moving coil voltage is also smaller and requires a phono preamp that steps up the voltage.

The sound reproduction tends to be even more defined than compared to moving magnet, bare in mind the price difference is much greater than a high quality moving magnet, however if you are seeking the highest quality audiophile sound, then moving coil is the best choice.