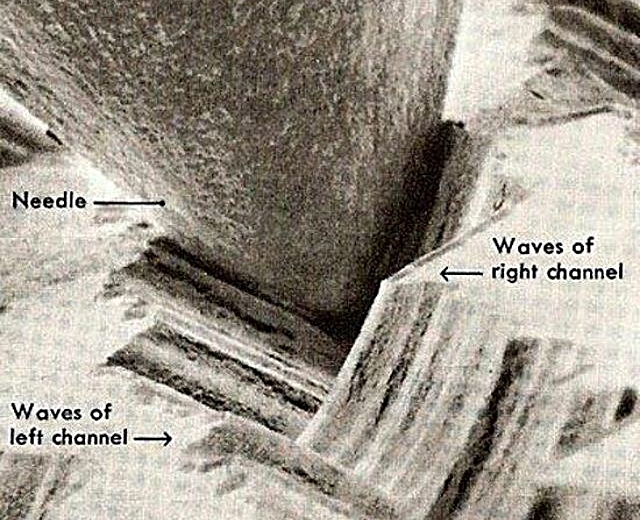 The image above shows a close up of the analog audio waveform in each groove.

A record is a thin plastic vinyl disc into the surface of which is cut a spiral groove. Analogue audio is expressed as variations (waves) in the wall of the groove, and played back through a needle being placed in the groove and held stationary as the record is rotated anticlockwise on a turntable.

The vibrations of the needle are converted into electrical audio signals which are amplified for your hi-fi system. The discs hold recordings on both sides, and can be found in 12″, 10″, and 7″ variants. Long-playing albums typically require a rotation speed or 33⅓ RPM, while singles usually rotate at 45RPM. You’ll also see reference to earlier 78RPM records and rare 16RPM talking book records.

The groove itself would originally have carried mono audio, but later recordings were adapted for stereo by expressing the right and left channels in its opposing walls. An equalization curve is applied to the audio before recording in the vinyl, this reduces the bass and thus the area taken up by the groove and the chance of the needle jumping out of it.

A corresponding reverse curve must be applied in your playback device’s preamplifier, this is referred to as the RIAA curve after the industry organization that specified it.

Ask in store for advice on choosing your first turntable and more!